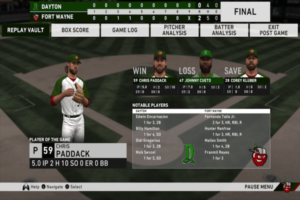 FORT WAYNE, Ind. (ADAMS) – The Fort Wayne TinCaps may not have been able to open up their 2020 season at Parkview Field as planned on Monday, but nevertheless, they proved victorious on Virtual Opening Day.

The TinCaps beat their scheduled opponent, the Dayton Dragons, 2-0, in a game played on MLB: The Show. But beyond the result of a video game, the TinCaps prevailed in connecting with their fans through social media to deliver the brand of fun that has made the organization one of the most popular in minor league sports.

“Our goal every game at Parkview Field is to help make fans smile,” said TinCaps Vice President of Marketing and Promotions Michael Limmer. “Even though we couldn’t do that in our usual fashion in person at the ballpark this Opening Day, we still wanted to bring the fun to our fans as best as we could online.”

The ’Caps streamed their MLB: The Show “broadcast” on Facebook, with team announcers John Nolan and Jack McMullen calling the action live. While MLB: The Show doesn’t automatically have Single-A teams available to play with in the game, TinCaps video production intern Zach Webb “created” the TinCaps, designing Fort Wayne’s apple logo and uniforms in such detail that many fans didn’t know the difference. The TinCaps assembled their roster with an all-star cast of the franchise’s alumni, like Fernando Tatis Jr. (2017), Josh VanMeter (2014-15), and Torii Hunter (1994).

With Webb at the controller against the computer, Tatis, who set the franchise’s single-season home run record at the age of 18, fittingly hit a solo home run in the top of the fourth inning. That was after Hunter Renfroe (2013) homered in the third. On the mound, Chris Paddack (2016), MacKenzie Gore (2018), Dinelson Lamet (2015), and Corey Kluber (2008) combined for the shutout.

The TinCaps’ video production duo of director Melissa Harring and assistant Tim Bajema directed the event as if it was an actual game, with between-innings entertainment included. Fans were treated to clips such as the popular Bad Apple Dancers performing at the end of the sixth inning and the team’s creative director Tony DesPlaines singing “Take Me Out to the Ball Game” during the seventh-inning stretch. Past promotional highlights were also shown.

Along the way, the TinCaps interacted with fans in the comments section. Some fans were so engaged, they wrote, “Let’s get loud!” during the ninth inning, mimicking what the video board would typically display. Viewers chimed in from all over the country during the game.

The TinCaps asked fans to share photos and videos of how they were celebrating Opening Day at home, using #MiLBAtHomeOpener. At the end of the day, the ’Caps selected contest winners to receive tickets to the team’s “real,” to-be-determined Opening Day at Parkview Field, plus the chance to throw out a ceremonial first pitch.

Notable figures from the community, including Fort Wayne Mayor Tom Henry, submitted their own renditions of “Take Me Out to the Ball Game,” along with encouraging words.

“We don’t know yet what the 2020 TinCaps season might look like,” Nutter said. “But we do know that we’ll be ready and excited to welcome you to Parkview Field, whenever that day will be, for the TinCaps Re-Opening Day. Until then, from all of us at the TinCaps, see you soon and be safe at home.”

Since discovering their season would be delayed in mid-March, the TinCaps have remained active on social media under the direction of digital content manager Cory Stace. Other recent campaigns saw the team design personalized, uniform-style phone wallpapers for fans and take requests to humorously Photoshop the team’s mascot, Johnny, into miscellaneous scenes.

Most importantly, the TinCaps have also served as a voice encouraging fans to “stay safe at home” as part of the #INThisTogether effort. The organization has also sought out ways to support the area’s healthcare workers and others stepping up in this challenging time, plus promote restaurants that continue to operate.

Assistant director of marketing and promotions Morgan Olson, community and fan engagement manager Brenda Feasby, and marketing intern Sarah Kendall have been pivotal in planning and executing these endeavors, too.

Going forward, the TinCaps remain committed to finding creative solutions to entertain their fans while the baseball season is delayed.

In the meantime, fans can continue to get their TinCaps fix in some form by viewing broadcasts of games from last season on Comcast Network 81 and MiLB.TV.